All last week it rained and snowed while Roman and I were holed up in the house waiting for the weather to clear. Roman was such a crank; he screamed every time I tried to put him down and get anything done so I finally gave up and held him while he napped. I didn’t feel good, I was frustrated and exhausted, and if I’m being perfectly honest—I wanted to take a nap myself or get stuff done around the house instead of hold him. But then, right in the middle of us both being cranky, he tucked his soft, warm head up under my chin and fell asleep in my arms.

In spite of me.

I realized while I lay there holding him how it felt just like holding him for that very first time. After 20 something hours of labor and the three longest hours of my life pushing—this bruised, screaming, pink little baby was put on my chest. And though we had both been through so much, he tucked up under my chin, stopped crying, and fell asleep listening to my heart beat against his. We were never strangers; we knew each other from the start.

I thought I loved him then. I know I love him now.

And I love every moment he lets me hold him in my arms…before he starts arching his back, pummeling me with those legs that never stop moving, or trying to rip my glasses off and fling them across the room.

He keeps me busy. He wears me out. And then he falls asleep in my arms and reminds me why I would do every hour of labor all over again to hold him once more for the very first time.

Today the sky is blue and the roads clear of snow and slush. Roman and took a really long walk around the neighborhood and I think after breathing some fresh air and stretching our legs, we’re starting to like each other again :]

Besides, who couldn’t love this face? 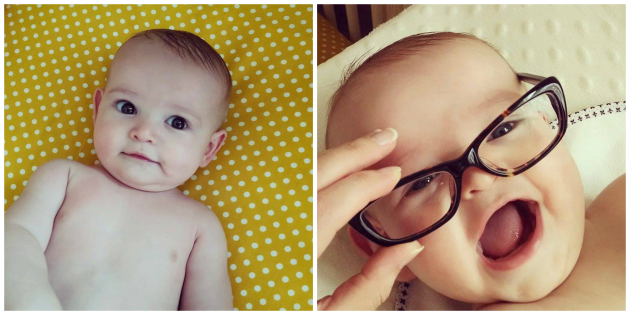 4 thoughts on “Love From the Start”