I’m sitting at my desk enjoying the sunshine after several days of snow and seemingly endless winter gray. My view out the window–icicles and snow mounded up in heaps on the roof. 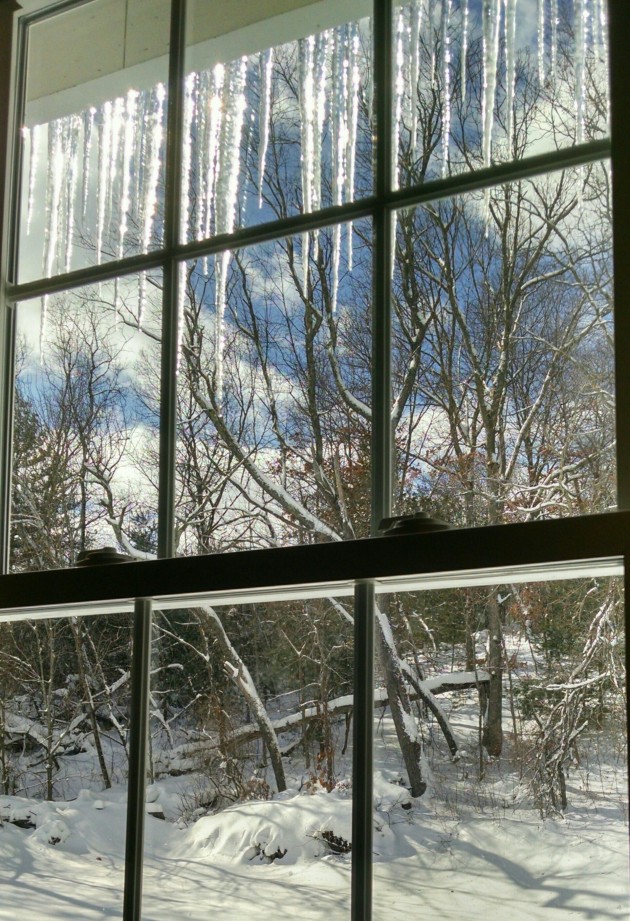 I live here because of Darren–that’s the truth. I love sunshine, and bare feet, and warm weather. I know you’re not supposed to hate stuff but you guys, I hate winter. So why do I live in a place that’s winter for six months out of the year? Because of a boy.

Darren is a New Englander inside and out and I’m pretty sure the one thing I will never persuade him to do is move away from the motherland. He’s fairly certain he’s already living in a foreign country having left the walls of Maine–so you see what I’m working with.

So if Darren’s in New England, I’m in New England. I love him and he’s worth it even for the cold–which is saying something significant and profound, trust me.

So you heard the Pats won the super bowl, right? Right. Darren wanted you to know. So let me you tell you this fine Valentines week just exactly what true love looks like, okay? 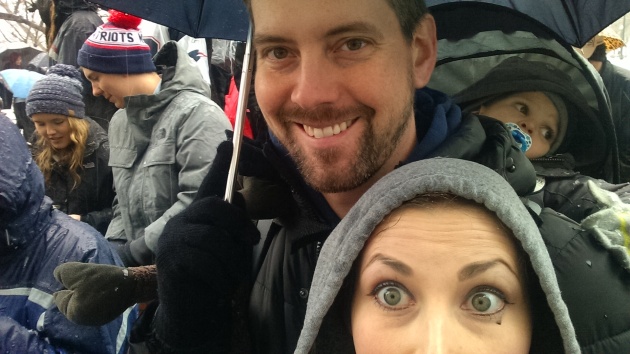 This is at the Pats victory parade in Boston. It was sleeting and snowing AND raining because, hello, New England, remember? That is me with my eye makeup washing off in said weather. And you can see in the background how totally delighted Roman was to be there. Darren is smiling. Of course he’s smiling.

When you need an umbrella because it’s raining but you also have to keep shaking the snow off your umbrella so it won’t collapse…just no. Also, I’m pregnant so I have rights, people 😉

After my legs were numb and I had sung my baby asleep under an umbrella in a backpack carrier surrounded by a mob of loud, intoxicated Pats fans–Darren says, “Wow, we were 15 feet from Tom Brady’s face–that was so worth it!” And herein is love–I did not punch him in the face, ya’ll, not even once.

And I walked back to my car because the parking lot at the train station was overflowing and I didn’t get a divorce…I didn’t even start the proceedings. Happy Valentines day, you guys, this is what true love looks like in New England ❤ ❤ ❤

Life is full of seasons, made up of seasons. There are seasons of abundance and joy and dry seasons when the soul is weary and parched. It reminds me of the land I grew up on in Missouri and the way we talked about the weather like it was money–because rain, too much or too little of it, could mean everything to a successful crop and harvest.

This winter season feels like the longest I’ve ever experienced. I usually declare it spring as soon as we’ve poked our toes across the line into March but there doesn’t seem much point in doing that this year with the snow still falling and forecasted as far out as we can see. This winter has been made up of long days cooped up in the house taking care of a baby and long nights waiting for Darren to get home from work and class. And I’m starting to feel a little parched, dried up, in need of some cleansing rain.

I’ve been discouraged, tired, overwhelmed. I’m ready to be done with winter, done with house remodeling, done with busy days that keep my little family from being together and enjoying each other.

I want to quit.

But I remembered yesterday, that life is made up of seasons–seasons of abundance and dry seasons without rain.

This discouragement, this weariness, this wanting to give up and walk away–this is just a season without rain. Seasons change. Winter, no matter how stubborn, always gives way to spring. The flowers always poke through, even if they must first poke up through the snow.

I’m thankful that seasons come and go, ebb and flow in and out of life like the tide. I’m thankful that the longest, darkest night always gives way to dawn. But I’m even more thankful that right in the middle of the dark and dry spells, there is water and light and hope. There is God. And God doesn’t change, he doesn’t ebb and flow or fluctuate. I don’t need my life or circumstances to change in order to be refreshed–I can be refreshed right here in the desert by a God who always brings light and hope and renewal.

Soon, the snow will melt. I will feel the sunshine on my skin and be able to go outside and stretch my legs. I can’t wait. But until then, I’m using these cooped up winter days to find the light and rain I need in my soul. This season will pass. I will look back at this winter and these first months as a mother and see this time I’m now in from a different vantage point. I have to remind myself of that–that this is a season. No matter how overwhelming a day or period may be, it will pass, it will change. And even when I’m in the middle of a long, discouraging stretch without change, God is always the same–always present, always renewing, always what my parched soul truly needs for actual, lasting change.

I sort of hate winter. Like, I fall apart and have a really bad attitude about it not unlike a toddler throwing a temper tantrum–it’s bad. So it makes sense that I would live in New England, hating winter and all. Fortunately this post isn’t actually a downer about things I hate, it’s a shameless excuse to share cute pictures of my baby. And to say that even though I still hate winter, this one has actually been kind of fun because I get to watch it through eyes that have never seen snow before. I mean look at his face…I really can’t hate something that leaves him filled with so much wonder. 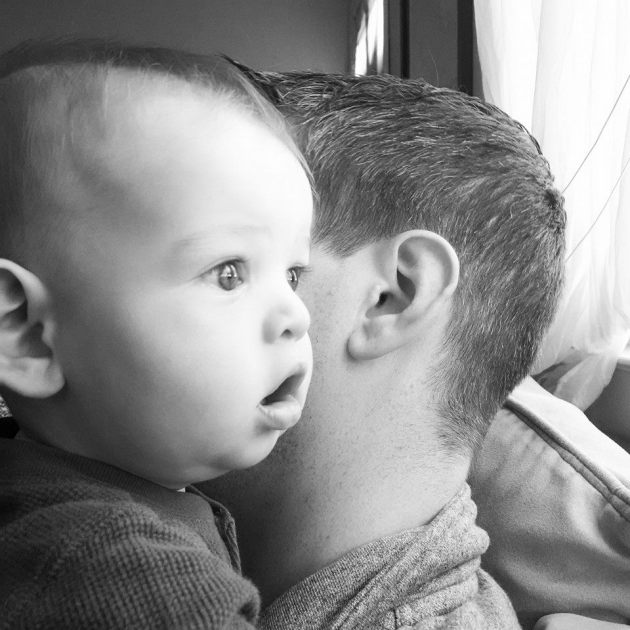 And then there’s this one which has nothing to do with winter, but isn’t he cute? I love him so much. That’s all. Carry on.

There is a certain hour in the day when dead things come alive again—resurrected by the sun. Grays and browns are robed in light and the landscape drips in gold and glitter. 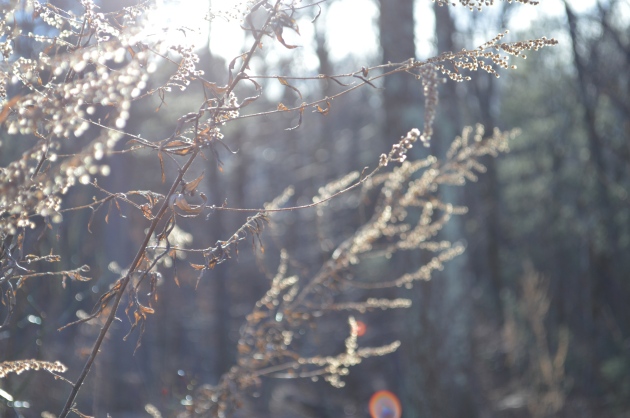 The winter earth is not dead; it’s resting, waiting, anticipating when life and color will open before us again.

Here’s to finding new life in a new year.

We just spent a week in the Tennessee mountains. Darren was turning 30 and as he has been saying such things to me as “the buttresses of his soul are collapsing” and “his youth is now a distant memory”….I thought maybe he could use a week away in the woods to soothe his sorrow as he faces this new decade of life ;] It worked too.

We spent most of the time tucked away in our cabin but we ventured out for a couple hours each day and wandered through the different shops in town. Then on our last day we decided to drive up into the woods and see what was hiding beyond the edge of town; it was worth the trip.

Just a few minutes out of town and we started noticing the distinct frost line running around the mountain tops and leaving everything capped in white.

We drove up and up the mountain trying to get a better look. 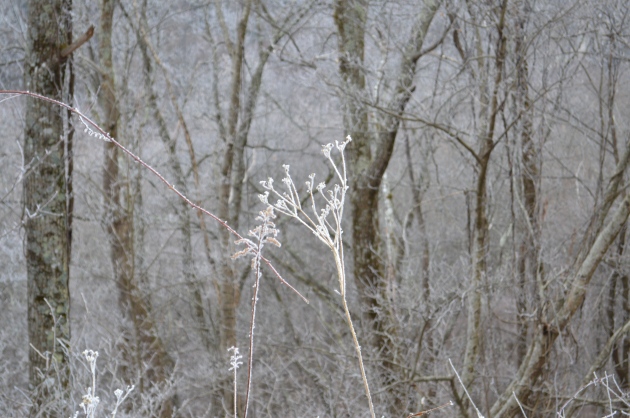 And soon the frosted trees looked more like fluffy billows of whipped-cream clouds than anything tethered to the brown winter earth. 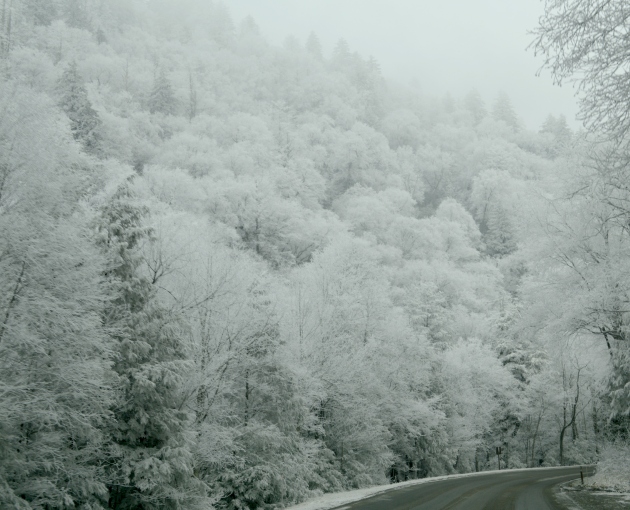 And we learned that sometimes you need to look a little harder to find the places where magic is hidden and winter is sleeping quietly on the snow-kissed mountain tops. 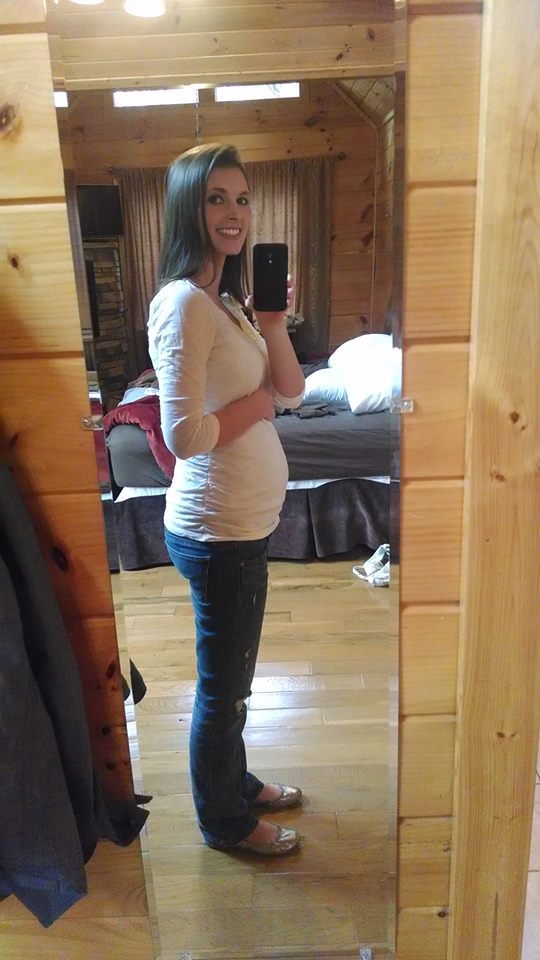 {18 weeks pregnant and feeling a bit like a mountain myself} 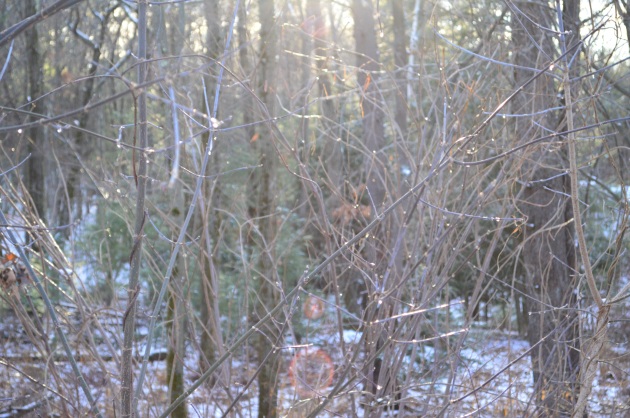 I don’t pull my camera out very often in the winter. I forget to look for the beauty and the magic when the world is cold and gray— when it seems like everything is dead or asleep until a warmer, better day.

But sometimes I remember to look. Sometimes the light pouring in the kitchen window catches my eye and the sun falling sleepily below the horizon beckons me to come outside and see.

Sometimes dead things frosted and glittering with snow and ice are as lovely as a winter flower, blooming and blossoming from the grave.

Katniss comes outside with me and tip toes through the snow while we hunt for pretty things. 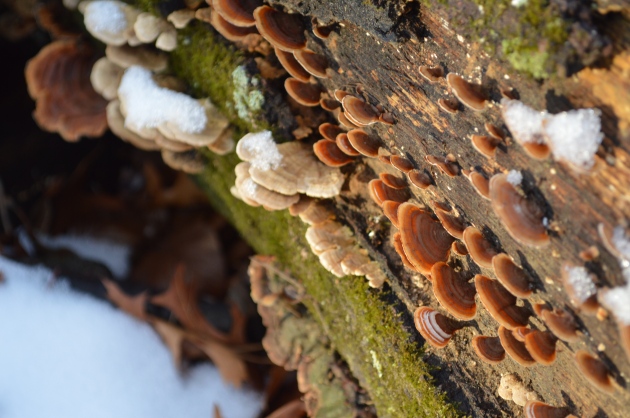 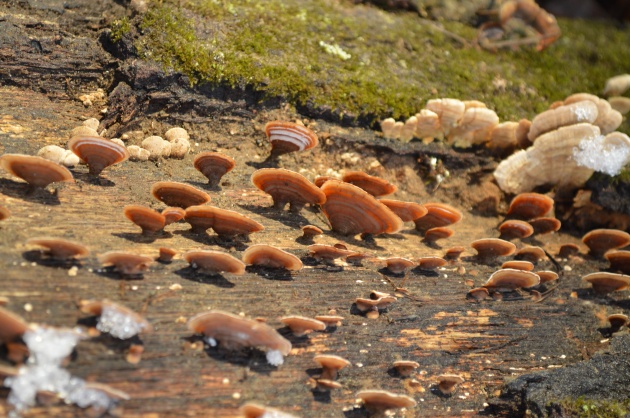 And sometimes, when we are patient with the cold, we find a whole living world of green and gold growing in our own back yard.

“I wonder if the snow loves the trees and fields, that it kisses them so gently? And then it covers them up snug, you know, with a white quilt; and perhaps it says ‘Go to sleep, darlings, till the summer comes again.’”   -Lewis Carroll, Alice in Wonderland